Long time without an update, but I was kind of waiting on hearing on a few things. Lots of ups and downs lately, but this one will be focused on Hand Fart finally being released online.

It's been over a year since Hand Fart first screened and I had really high hopes for it because it's a really short piece that leaves an impression. I submitted to all of the larger festivals and even got invited to some higher end festivals, but by the end of it I had only gotten into the Nashville Film Festival. That experience was really great though and we won the Audience Award at that festival so I still believed in the movie, but we never really got into any other festivals. I was told that it was hard to program, which I suppose I can understand.

Because Nashville Film Festival was an Academy Award Qualifying festival I was eligible to submit for the movie to be a Vimeo Staff Pick Premiere. They only pick one movie a week and they usually follow it with a small write up. Unfortunately, I didn't get a staff pick premiere, but my movie did get picked as a staff pick, which is just as good. I always thought that Hand Fart would do better online anyway, so I'm glad to announce that it is now online for all to see on Vimeo. I even made this cool thumbnail for everyone. 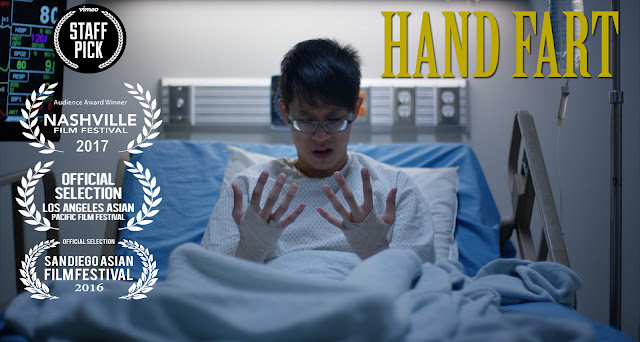 So watch it, share it, do whatever. I think this is the greatest artistic achievement I've created so far and I hope people recognize it. I've been writing a lot and have a lot of things coming, but I hope this holds people over until then.