Zine Article and other stuff

Little late on the update. Been mostly busy and nothing huge to update on. A lot of writing has been happening. Just finished writing drafts for my next short, finished up a TV pilot, working on a feature, and recently got accepted as a writer for the CBS Sketch Diversity Showcase.

I also recently got asked to write something for my friend Lianne's zine. I never wrote for a zine before. I'm still not even 100% sure what a zine is, but it was cool to be asked so I accepted. The theme for the issue was Los Angeles and I wanted to write something unique. I was suggested to do a list so I decided my topic would be comparing LA the state to L.A. the city. I have it posted below. 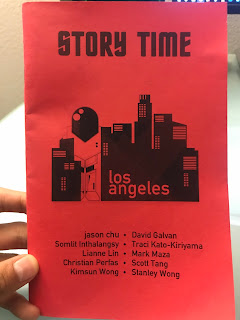 LA vs L.A.
By Stanley Wong
I find myself in a very particular case when it comes to people using abbreviations for places that involve the letters L and A. I was born and raised in Louisiana (LA), but I moved to Los Angeles (L.A.) about four years ago to LIVE THE DREAM. A lot of the time in writing people ask a question about LA/L.A. and I have to follow up with “Do you mean Los Angeles or Louisiana?” On both ends, I have people telling me “Well of course I meant L.A/LA, you dingus.” But how the hell was I supposed to know? A lot of people from Los Angeles have gotten lazy and stopped using the two periods and I guess people in Louisiana just never think about Los Angeles at all (which might explain why no one ever comes to visit me). Anyways, I just wanted to start this piece with that bit in hopes that people stop calling me a dingus.
Parking – In my first four months of living in Los Angeles I got eight parking tickets. I haven't gotten a parking ticket in a long time lately and it's because I learned one simple thing. PARKING SIGNS MATTER. In Louisiana, you can straight up look at a NO PARKING sign and what it actually means is WELL I'M NOT SAYING YOU CAN PARK HERE, BUT YOU CAN PROBABLY PARK HERE. Literally every thing you can get a ticket for I had to find out the hard way in Los Angeles. You actually have to pay the meters the amount of time you park there? Yes. The street cleaning is actually a real thing? Yes. When it says two hours parking they actually know that your car has been there for longer than two hours? This one really blew my mind, but yes. So learn from my pain and trust the signs. They will not mislead you. They mean what they say.
Weather – Los Angeles is known for its weather. I can wear a pair of jeans, T-Shirt, and a hoodie all year round and I'd be perfectly fine. Louisiana is also known for its weather. I can wear a pair of jeans, T-Shirt, and a hoodie for like 4 months out of the year and every other time and I would probably just die. I've gotten soft. I've been in L.A. long enough now that when I go anywhere else and experience anything below 60 degrees or above 90 degrees Fahrenheit I think the world is ending. I went back to Louisiana for the summer once since moving and I felt like my face was melting. I asked my friends and family if there was record breaking heat that year and they said no. In fact, it was cooler than normal. The weather is so goddamn nice in Los Angeles that when it rains, people lose their fucking minds out here whereas in Louisiana there can be a category five hurricane headed straight for you and people won't even think about moving. I was there for that shit. It was nuts.
Food – My favorite culinary discovery in Los Angeles has got to be the taco truck taco. There just isn't anything quite like it and there's nothing I've found that's more satisfying at 2 AM when nothing else is open. In Louisiana, the closest thing you can get is Taco Bell. Not only as just a late night nothing else is open and this is my last resort type of food. Taco Bell is actually a pretty decent option there when it comes to just Mexican cuisine in general. I know that Louisiana is known for its food, but it wasn't until I lived in Los Angeles for a few years that I realized that it's ONLY known for its signature Cajun/Creole food and nothing else. Don't get me wrong, it's amazing. But Los Angeles has actually been called the city with the best ethnic food in the world. Pretty bold claim, but I believe it. My taste palate has also been completely ruined because of Louisiana. Almost any time that I eat seafood anywhere else I think “This is ok.... but it would probably be better with a fistful of cajun seasonings, a sauce made out of an entire stick of butter, and being fried to hell.” But even despite Los Angeles’ completely availability of amazing authentic Mexican food, I've still eaten Taco Bell out here a few times. Old habits die hard.
Asians – The first thing I did when I arrived in Los Angeles after a four day drive from Louisiana was go to the Westfield Mall in Century City to eat. After five seconds of walking around I looked around and screamed “HOLY SHIT THERE ARE A LOT OF ASIANS HERE!” Growing up in the deep south there weren't a lot of Asian people. I did a high school senior prank where we threw boxes of crickets in the hallways and I opted to wear a mask even though that calls a lot of attention to itself. But, I did it because literally the only thing someone would have to say to identify me is that they saw an Asian dude with glasses. I was the only one in my entire school. Would that shit fly in Los Angeles? No, you can probably find just as many actors/actresses as you could Asian dudes with glasses. So it was at that moment I had the epiphany that I wouldn't be alone anymore. I wouldn't be “the Asian kid” in all the social circles. It was an interesting feeling. That's all I have to say about that.

She also drew this cool picture of me and added it into the book. Fan art! 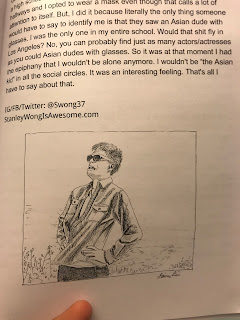