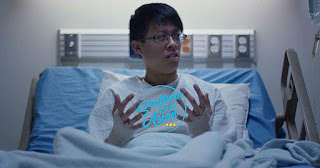 Hmmm, I thought I made a post for being on this podcast, but apparently I forgot as well as just generally updating this blog at all (whoops).

So I was introduced to Keith Chow by Jes Vu, a producer I regularly work with. He runs a podcast that focuses on Asians who are from the South. Since it was the first podcast I've been on that wasn't focused on the entertainment industry I got to talk about the other big part of my life. Specifically food. Being a Southern Asian is one of the things that is a big part of who I am and helps me stand out. I thought it was a great interview, so go to the link below and check it out. It's a good one.

I also wanted to come back to talk about the most recent TV role that I filmed. It was for the Starz show Counterpart. It recently started airing even though I shot it around this time last year. It was supposed to be a big show and is apparently getting good reviews. I knew I was in episode four, but didn't think much of it. It wasn't until today that I even thought to check. I went on my IMDB however, and realized that it had been taken off of my page. That's never happened before so I went to watch the episode and sure enough I found that my whole scene was cut exactly at the point where I leave the room.

It wasn't a huge part by any means, but this does mark the first time that I've just been completely cut out of something. Pretty much every other role that I've done has been reduced by a moderate to significant amount, but at least I got to see myself and I got the credit. Not this time. Honestly, it's not a big deal. I thought this part would stay in because my character says a lot of information that I thought was necessary. But as an editor, if something isn't necessary it gets cut out. In case that was me.