So I recently had a couple of bookings that were exciting. First, I got a small role in a big movie that I can't really say anything more about. Second, I got a commercial. Which is great, because I haven't been in a commercial since I got cut out of the Apple one I booked when I first got out to Los Angeles. I don't know what it is, but something about my demeanor or look does not sell products. I had heard stories about how most actors make their living from booking commercials and a good one can carry you through the year. Booking an Apple commercial, I felt like I was pretty set. I forgot exactly how the news broke, but I remember pulling up the commercial on youtube and realizing that my whole segment was just cut out. That was almost four years ago and I had gotten close, but hadn't booked anything since then.

Cut to a few years later and I got an audition for a 7-Eleven commercial. The first audition I had to pretend to be a store clerk and be confused by someone else going crazy. Commercial auditions are generally really vague and they call in like a hundred people for the first round so I just did what I think they wanted and left and forgot about it. That's usually the best policy.

I was lucky enough to get a callback, which is when they narrow it down to about 8-10 people and when I went in they completely changed what the concept was. Now it was going to be a Deadpool tie in and I was watching as another co-worker played Jenga with a tower of chimichangas. Everyone there for the callback was freaking out and trying to desperately research the connection of chimichangas to 7-Eleven. I had enough sense to actually think about the connection to Deadpool and chimichangas. I'm fairly familiar with comic books and remembered that the character's favorite food is chimichangas and also knowing that Deadpool himself is very meta I decided to use that in my audition.

The director just wanted us to generally improvise and when the cameras rolled, the first thing I said was "So 7-Eleven is selling Chimichangas for Deadpool huh? Good on them for cashing in on that movie tie-in." and the director busted out laughing. He then said he couldn't have me say that in the commercial and told me to improvise something else and I just said some generic stuff about chimichangas. But I felt like I took an interesting risk and it seemed like it paid off. Sure enough, I found I got an avail which means you're in the final 2-3 and they want to make sure your schedule is clear for the shoot. I had gotten this a few times and it's my least favorite part of the process. I'd honestly rather just not know at all. Every year I get 3-4 avails only to be released and it doesn't feel any better to know that you were so close. After a few days my agent called and I was prepped for the bad news, but she actually said I booked it. I was ecstatic.

The shoot was a series of vignettes and I was kind of worried because that was what the Apple commercial was like and they just took my whole segment out. But I was in this segment where me and another guy stand on opposite sides of a giant chimichanga tower while we said some lines.  I felt like my place was pretty secure because they spent a lot of time making the tower and it was the most visually interesting thing in the commercial. I asked the props person and they said they actually made over 500 chimichangas and stacked them up (they were held together by skewers). Here's a pic of it below.


So now that I booked a commercial and filmed it I still had to worry about if they wouldn't air the commercial or if I got cut out. One day my friend posted a link to the commercial and said "I'm assuming you are in a different one?" I immediately clicked it and watched through and saw my scene. The chimichanga tower was in there, but instead of having the shot be the tower in the middle and me and another guy standing to the side of it, they just zoomed in on the other guy. My scene hadn't been cut out, but I had literally been.... cut out. I then emailed my agent to ask what was going on and they said they were holding out to see if I was in alternate cuts or anything. But sure enough, after a few days, I got a letter saying that I had been released from all iterations of that commercial. 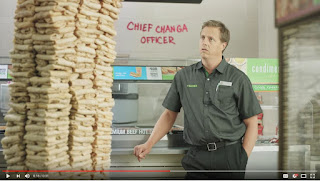 So I'm 0 for 2 on commercials. People tell me I shouldn't complain and that I'll have to just settle with being a "movie star". But anyways.... I was close. I'm literally on the other side of that chimichanga tower, but I've yet to really book a commercial.