I've been a little behind in updating this blog. I try to do it once a month, but sometimes there isn't anything to report. Also, I just get lazy and I'm really sure who even reads this. Seeing as how it's the last day of the year I felt like I should try to make a wrap up to summarize how things went. I'm also just copying what I just saw someone else do on their Facebook.

As far as highlights go, I would say the biggest thing that I did all year was producing, writing, directing, and acting in my short Godzilla Party. Budget and length wise it's the biggest thing I've ever done. It'll probably end up being a 15 minute movie, but it cost me about $13,000. I kickstarted $5,000 of it, but that still meant $8,000 of it came out of pocket. So far reception has been pretty good, but it is a pretty weird movie with a new concept so it'll take some time to really get right. I look forward to seeing how it'll do in the 2019 festival circuit.

Second to that I think would be getting 3rd place at the Slamdance Screenplay competition. This whole year was kind of dedicated to me trying to transition more into writing. I've been trying for a few years now to get into various diversity fellowship writing programs, but it was only recently that I decided that I should be focusing on screenwriting contests instead. This was our first one and we did really well so I look forward to seeing how I do in future contests and writing more. We got a lot of interest in the script itself and have sent it out, but haven't quite gotten any meetings just yet. It's definitely a different world getting literary meetings opposed to talent because they still have to read your long ass script first. Will have to followup with everyone in the new year.

As far as acting goes, I booked one small role in a very big movie and one commercial that I got cut out of. Both of which were in the first few months of the year. I thought that meant the year would only get better from that point, but it actually slowed down a lot from there. I actually had less auditions theatrically and commercially then I've had in my entire career. I was actually getting worried that my acting career was maybe on its last limb, but after reading some other posts it seems like everyone was having a really down year. Hopefully things this year will pick up after the Crazy Rich Asian craze. I haven't really experienced it yet, but I've had a lot of friends who have already done really well since then.

I took a voiceover class recently. I always wanted to get into this side of the industry, but got discouraged after an agent told me they couldn't take me on because of my Asian accent (FYI I don't have an Asian accent). It was the first class I had taken for maybe two years and it was great to be in  that environment again. I haven't dived any further into it, but hopefully next year I can get that to be one of the many potential career options.

I got kicked off of the Youtube parter program. I used to get 300k viewers a month and about $150-200 from my channel, but Youtube really went through some big changes and they kicked me out of the program because they claim that I'm reposting someone else's videos? I've gone back and forth with an automated system for months and they won't tell me what that means exactly. It's been really frustrating and has made me care even less about my Youtube channel than I already did. Hopefully I can sort that out because it seems like something that could be easily fixed, but I just haven't figured out the solution yet.

As far as making anything else outside of the bigger short, I think it was only my attempt at doing a Channel 101 short that didn't even make it in. There were a few other opportunities I had to make smaller things, but I think in general I've lost some motivation to do them. They're still fun, but ultimately I feel like I'm kind of growing out of doing the shorter/small scale videos for my Youtube. The paragraph above probably being a big reason. In general I need to just make more stuff though so we'll see what happens.

Regular work wise it's definitely been a tough year. I usually got by doing freelance post production work from editing, assistant editing, coloring, DIT, etc. I usually got most of my work through larger internet companies, but something changed for this year. Apparently a California law got enforced where a job that a full-time person could do can't be done by a freelancer. Even though this was meant to protect the worker, I actually don't want to work full-time because of the loose schedule required to get into acting. This resulted in me getting nearly zero post production jobs through my usual means. That along with getting less auditions in general has really gotten me to rethink my work situation. Something I really intend on figuring out for 2019.

I went to the Sundance Film Festival for the first time this year. It was a pretty eye opening experience. I actually didn't watch a single movie and I kind of wish that I did at least once a day. We actually just went to parties all day and night. Around seven every day. I should be going to more film festivals though. It helps to be around other filmmakers and to just get motivation. It was after going to SXSW for the first time that I came back and made my feature film Steve Chong Finds Out That Suicide Is A Bad Idea. Didn't get THAT motivated this time, but I am going again next month. Was hoping to have something to show there this time, but didn't happen. BUT, I did get a free pass to Slamdance because of the screenplay competition so that kind of counts? It's pretty much on the same street and at the same time.

I usually try to do a bigger international trip every year, but couldn't really afford it this year because of the short. I did go back to Louisiana this summer to hang out with my 10 year old nephew for a week. That was actually a really cool experience. I was basically a kid again for that week. I also did my standard EVO/Vegas trips and Comic-Con, but both of those were pretty standard fare. As a replacement to the international trip, we are doing a 3 day Mexico cruise with the same crew next month. Looking forward to doing that. It's been a while since I've done a cruise and never with a group of friends.

Haven't gotten around to watching all of the award movies just yet, but if I were to pick my favorites of the year I think I'd go with Hereditary. Hard to pick any others for sure just yet. I really enjoyed Into the Spiderverse, but I'll always have a bias toward Phil Lord/Chris Miller projects.

Anyways, I think that just about sums it up. Here's some pictures from the set of the short Godzilla Party just because. 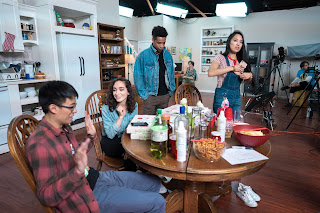 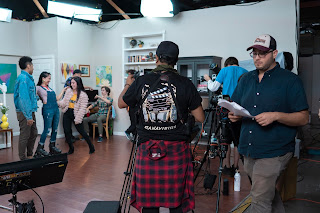 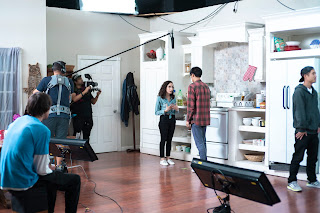